Fran Bow is a creepy adventure game that tells the story of Fran, a young girl struggling with a mental disorder and an unfair destiny.
After witnessing the gruesome and mysterious loss of her parents, found dismembered at their home, Fran rushes into the woods, together with her only friend, Mr. Midnight, a black cat that Fran had previously received as a present from her parents.

In the forest, Fran goes into shock over the loss of her parents and when she recovers, she’s at Oswald Asylum, an oppressive mental institution for children, and Mr. Midnight is nowhere to be found.

After having a dream about her beloved cat, Fran decides to escape from the mental institution to find him and go back home to Aunt Grace, her only living relative. 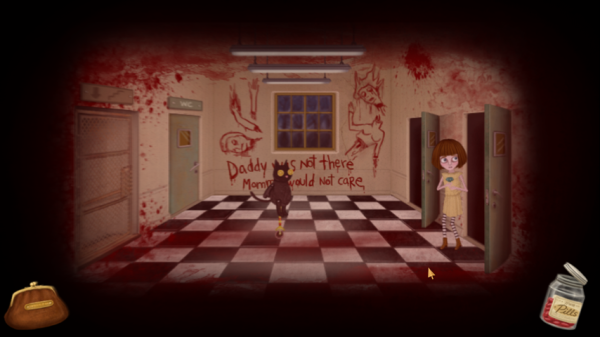 Our game studio is based in Hedemora, Sweden. It was founded in 2012 by us, Natalia Figueroa and Isak Martinsson.

Natalia specializes in story writing, art, animation and character design, while Isak specializes in programming and music. We have been working together since 2009, doing short films, music videos and animations, but in 2012 we realized that making movies wasn’t really what we were after.

Something was missing from our creations and we realized that we wanted interaction, we wanted to go out and play!

We have done a few free games, mostly for the fun of it and to learn, but Fran Bow is our biggest project ever, for which we did a crowdfunding campaign, and thanks to everyone who supported us, we were able to finish!